This is the first post of three that explain how to add dependent properties to Client Web Part Property Pane.
As an example of such properties I decided to use Lists dropdown and Views dropdown. Views dropdown is populated based on selected List.
As a result of these three posts we'll have a fully working web part with ability to select List View in Property Pane:

Here is a content of 3 posts:
All the code is available on GitHub (https://github.com/AJIXuMuK/SPFx/tree/master/dep-props-custom-class)
I'm using Visual Studio Code IDE for the tutorial.
So let's start with preparation.

If it's your first touch of SharePoint Framework (SPFx) then you'll need to set up your environment (O365 and local) as it is described in Office Dev Center:
Set up your Office 365 developer tenant
Set up your development environment

After setting up is done you can start with your web part creation. The process is described in Build your first web part.
In brief, you need to execute multiple command line operations:
Create a new directory in location you want:

Go to created directory:
"Scaffold" your project with Yeoman generator:
Select name, description and base framework for the web part (I'm not using any default framework in this example. I tried to select knockout but it was not compiling).
Wait for a while until all the dependencies will be downloaded.
Play with your Hello World web part using Gulp:
If you're developing on Mac you'll probably need to run
It will run local server and SharePoint workbench for testing your web parts locally.

Basically, all the code of getting data is described in Connect to SharePoint.
In brief, we need to implement retrieving some mock data for local environment (when we test our web part on local server created by gulp serve) and retrieving SharePoint data.
We can use IWebPartContext.environment.type property to understand what data to retrieve.
I don't like the idea of putting all the logic into the web part class itself. That's why I propose to create mock data helper, SharePoint data helper and data helpers factory to created needed helper based on current environment.
First, let's create all base entities we'll use in our app. (I created a subfolder named common in web part folder and SPEntities.ts file in it.)
ISPList - represents SharePoint List object with Title and Id
ISPLists - represents SharePoint REST service response for /_api/web/lists service call

Now let's create a mock helper. We'll use some static data for test. The mock helper will be created in DataHelperMock.ts file.

Time to create SharePoint data helper. For this data helper we'll need a web part context and especially pageContext.web.absoluteUrl property that will be used to create a request url. Let's create a DataHelperSP.ts file and implement the helper there:

That's it. We have everything we need to get information from mock store as well as from SharePoint. It means that it can be used on your local server or on workbench.aspx from your dev site collection.
Let's test the results. In web part file add imports for factory, data helpers interface and base SP Entities:

Then, in render method add code to retrieve lists and views and log information to console:
And somewhere in console you'll find the results: 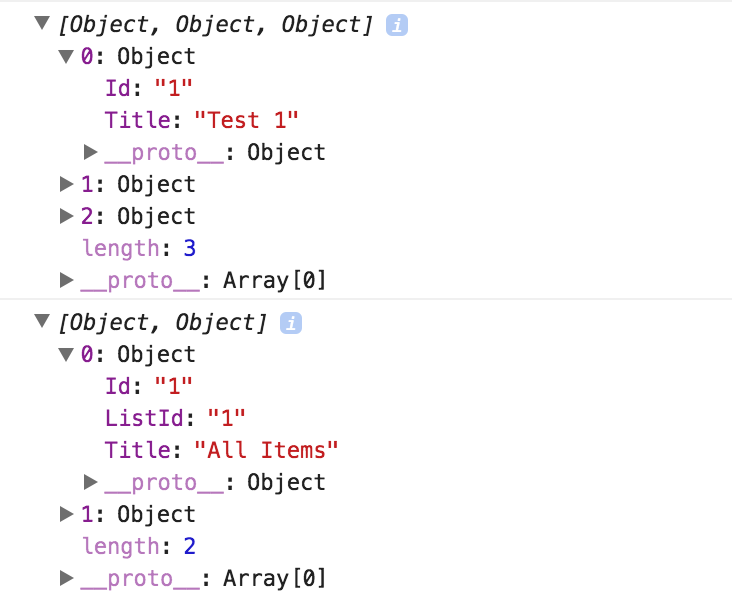 This is it for today. In the next post I'll describe how to create a custom field in a Property Pane that will use information from created data helpers and will dynamically update options in Views select when user selects a list.
Have fun!